Confused where one generation ends, and the other begins? Read this HR manager’s guide on the differences between the generations in the workplace, and how they fit into your organization. 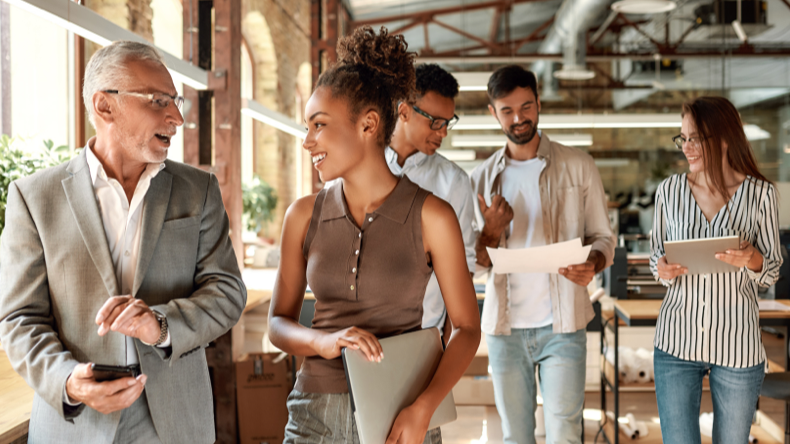 While generational differences may seem small, they have a big impact in the workplace.

Work is the one place where all generations come together. From Boomers to Gen Z, people of all ages collaborate within teams and on projects.

This can be challenging for managers who are trying to motivate employees. Each generation wants something different from the workplace. It’s your job as an HR pro to empower managers to develop strategies to engage employees of all different ages to keep them motivated and happy.

Understanding the generational differences between Baby Boomers, Gen X, Gen Y (aka Millennials), and Gen Z is a powerful way to harness their collective strengths and understand how to effectively communicate, manage, and lead them.

The more you know about each generation, the more you can navigate issues and sidestep potential conflicts.

What are the different generations in today’s workforce?

Today’s workforce is made up of 4 distinct generations.

As you can imagine, there are vast differences in communication preferences and work styles between people born in the 1960s and those born in the 2000s.

What generation is after Gen Z?

You might be wondering who will come after Gen Z in the workforce of the future. That would be Generation Alpha, currently considered to be those born in roughly 2010 and beyond. Of course, the oldest are just pre-teens now, but in the coming years they’ll begin to enter the workforce as they look for their first high school and college jobs.

What percentage of today’s workforce does each generation account for?

This means that Millennials make up over one-third of the U.S. workforce. Gen X takes up a third of the workforce itself, while Boomers make up a quarter and Gen Z comprises about 5 percent.

How do you motivate the different generations in the workplace? How to motivate Baby Boomers

Many in the Baby Boomer generation equate work to self worth. Perhaps more than other generations, they’re motivated by title, traditional perks (like a 401(k) retirement account), and prestige. Getting things accomplished at work and having those accomplishments recognized and rewarded can go a long way in managing a Baby Boomer employee.

They’re also fairly goal oriented. As a whole, they tend to be OK with minimal feedback, assuming that everything is fine unless they’re told otherwise. With little hand holding, Baby Boomers can be motivated by milestones like promotions and upgrades to prestigious roles and job titles.

However, this can lead them to being fairly rigid and functioning best in a traditional, hierarchical environment. They can struggle to understand and function in workplaces that take a flexible approach to their structure. How to motivate Generation X

As a generation that, by and large, grew up with a lot of alone time, Gen X-ers are happy to work independently. However, they’re credited with introducing the idea of work-life balance into the workforce. Many of them saw their parents dedicate themselves to their work only to suffer through an economic downturn in the 1980s, so they have a healthy skepticism about too much work.

This means they gravitate towards perks like flexible schedules and telecommuting that are becoming popularized by younger generations and enabled by technology. Because they’re so independent, Gen X relishes the opportunity to make choices, so allowing them to come up with their own ways of doing things or giving them the space to select tasks on a daily or weekly basis can go a long way. How to motivate Gen Y (aka Millennials)

Unlike Boomers, and even some members of Gen X, Millennials are characterized as job hoppers. You’re unlikely to see them stay at one place of employment for more than a few years. Pay and benefits are big factors in their decision to stay or go.

These aren’t the only things motivating Millennials, though. Like their Generation X predecessors, they love flexibility and options. They also love professional development opportunities.

Stagnation and feeling like they’re reached a dead end at their current role can lead workers of any generation, but perhaps especially Millennials, to look at what else is out there. HR managers can help retain Millennial talent by ensuring that there are plenty of mentorship and professional development opportunities to keep Millennials growing and advancing through their career. How to motivate Gen Z

Gen Z can be a lot like their Millennial predecessors, but there are a few places where they stand out. First, they want fulfillment and a sense of purpose from their work — they want what they do to matter.

Not only do they expect sincere corporate social responsibility initiatives, but they expect that same level of thought to be applied internally as well. Gen Z is the most diverse generation yet, so naturally diversity and inclusion efforts matter to the age group most impacted them.

Much like Gen X, Gen Z saw their parents plunder through the Great Recession of 2008, so they can be particularly motivated by pay and traditional financial benefits like bonuses after seeing what happened when people found themselves without enough. Perks such as a 401(k) match, student loan repayment, tuition reimbursement are important to Generation Z.

What else should HR managers know about generations in the workplace?

Tech savvy-ness is one last major thing to consider. It is worthwhile to note that both Millennials and Gen Z are digital natives, which means that they’ve grown up with technology for their entire lives and tend to have a faster, more natural understanding of it.

That means that they can be quicker to get up to speed with new technologies and might even suggest using technological solutions in the workplace first. Naturally this doesn’t mean that Boomers and Gen X can’t — or haven’t — learned plenty of tech things too, just that their approach to it might differ.

By investing in technology that streamline processes and make work easier, chances are you’ll keep all generations happy in the process.