The latest COVID-19 wave has caused unplanned closures and delayed reopenings for small businesses across the country.

After the Omicron variant stormed the global scene in November, all it took was the upcoming holidays to launch it into full force. While it seems like the variant has reached its peak in the United States, cases are still rising in certain regions. As a result, the cautious plans of businesses big and small — many of which were set for January — have been pushed back yet again.

Even back in the fall, businesses were eyeing the progression of the Delta variant and wondering whether or not their reopening and return to office plans would hold. Then came Omicron.

It’s no surprise to small business owners across the country that they’re bearing the brunt of the surge, from unplanned closures to push backs on reopenings with no end in sight. Long story short: Omicron has wreaked havoc on small business reopening plans.

Not only is Omicron getting in the way of reopenings, it’s causing closures to begin with.

Sara Carlock, the owner of a charcuterie board shop in Dallas called Amor y Queso, told NBC News just how hard it’s been for her. “Over the Christmas holiday, I tested positive,” she said. “But, since I’m the primary artist and food preparer, I couldn’t put the work off on anybody else and had to close for 10 days.” In the end, she missed out on thousands of dollars worth of New Year’s orders because of the closure.

In addition to complete closures, many businesses are cutting back on the days or hours they’re open because of staffing shortages as the U.S. clocks in at 350,000 new cases per day and 895,000 total deaths.

Restaurants in particular have yet again been hard hit.

“Things just started to feel a little more secure and now it’s tense again,” Courtney Kaplan, the owner of Tsubaki, an LA-based Japanese restaurant, told NBC News. “The hardest thing is having to close and reopen. There’s no planning for anything and that makes it really hard to run a business.”

John McCormick, owner of The Roguelike Tavern in Burbank, California, told ABC News that his small bar with no windows and minimal ventilation where people love to sing has been almost impossible to keep open.

“We’ve had a couple of near-misses at the bar,” he said.  “Folks that were in one night were posting on social media the next [day] about testing positive.” Even with the city’s high vaccination rate, McCormick closed the bar New Year’s week. With the cancellation of events and the pivot to takeout and delivery, hourly staff lost a significant chunk of their usual wages.

While many small businesses have opted for yet another temporary closure, others have decided to close their doors for longer after nearly 2 years of battling to stay above water. The Tin Room Bar & Theater in Burien, Washington, for example, announced earlier this month that it would close indefinitely, with hopes to reopen 6 months or even perhaps a few years down the road.

The new variant is pushing back reopening plans

A recent survey by Gartner found that Omicron has forced 44% of businesses to push back their reopening plans. While mega corporations like Google and Apple have decided to delay their returns to in-office work indefinitely, the situation is a harder one to adapt to for small businesses.

A recent survey by Gartner found that Omicron has forced 44% of businesses to push back their reopening plans.

Stephanie Brock, the vice president of sales for Red Thread, a Maine-based company that designs office layouts, told the Bangor Daily News that its planned January 3rd reopening was moved to the end of the month. Even though the plan was to just bring workers back 2 days a week, Brock and company decided against it. “I just don’t think enough information was available before the holidays for our leadership to feel confident that a full return was safe for all employees,” Brock said.

Like Red Thread, MEMIC, a Portland, Maine-based company was also going to bring workers back just 3 days a week on January 3rd until Omicron hit. MEMIC’s postponed its new plan for returning its more than 300 workers to the office to early February.

Beyond simply pushing back or scrapping reopening plans altogether, omicron has made the reopening process more complicated because testing and fast results have become difficult to find.

When staff members find themselves sick or have had an exposure, it’s taken them days if not weeks to even be able to get a test. Then they’re waiting days to find out the results and whether or not they can return to work. The situation has created a staffing shortage on top of a staffing shortage and many businesses have turned to overscheduling to cover for those out sick or awaiting test results.

Elizabeth Hyman is the director of operations for Kome, an Austin-based sushi restaurant. After closing to do a health and safety check on its staff in late December, they quickly extend their brief closure  because of a testing shortage. Hyman told ABC News that she was still waiting for all of her staff’s test results to come in on December 21 — 3 days later.

Brock says that everything from recommendations for booster shots to isolation guidelines will play a role in determining when they’ll have workers come back to the office.

Ultimately, for businesses big and small, Omicron has left many of them asking for the same thing: help from the federal government. As Politico reported last month, Omicron has energized “a lobbying push for billions of dollars for new aid for struggling employers and their workers.”

What Congress has to grapple with is whether the latest COVID-19 surge warrants additional rescue beyond the $1 trillion of emergency small business assistance lawmakers have approved so far. 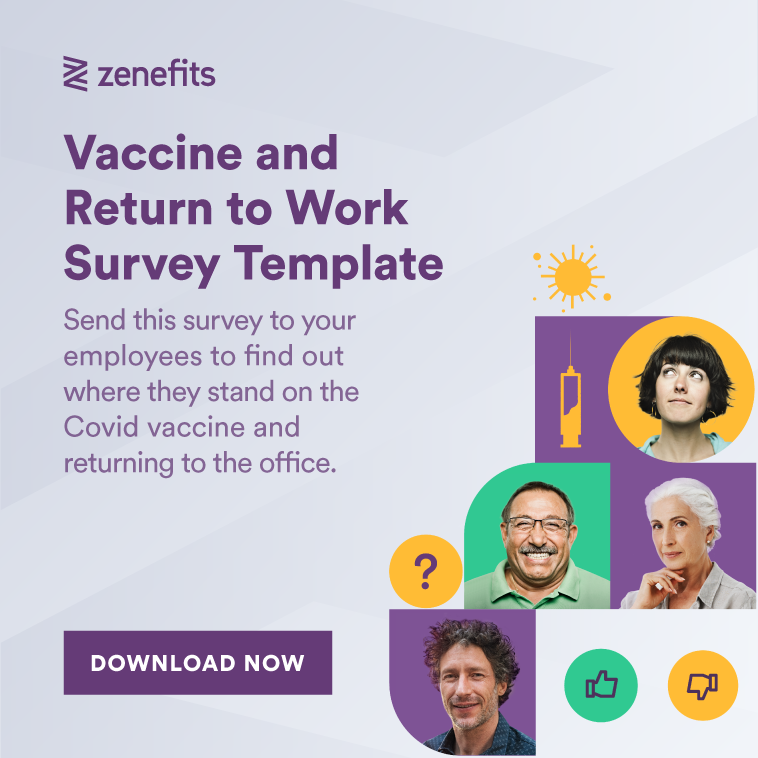 Customize and send your employees this short anonymous survey.